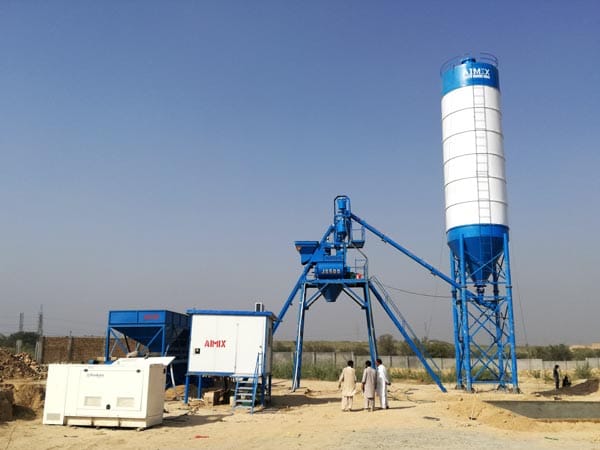 Rmc plant is a kind of mixing equipment to mix the concrete mechanically for large and medium-sized construction projects. And it is to mix cement, sand and water according to the certain proportion and produce the concrete mixture for constructions. Up to now, rmc batching plant has been the mainstream in construction machine filed. Moreover, it has made great contributions to water conservancy engineering, bridge construction, road construction, port construction, airport construction, electric power engineering and so on for its excellent performance. In addition, rmc concrete plant is well suited to mix dry concrete, plastic concrete, no-slump concrete and lightweight aggregate and all kinds of mortar. And there are many types of rmc plant in our company for your selection. Let’s have a detailed understanding together.

We have stationary type and mobile rmc plant, I will show you with pictures and specifications.

From the perspective of the distribution of shaft

Between JS series and JSS series, the mixing blades of JS series are horizontal, while JSS series’ are spiral.

From the view of performance

1. Between JS series and JSS series concrete mixer, the productivity of the latter is higher than the former, the evenness is 15% higher than JS series’ and the mixing time is half of JS series’;

You can choose any one concrete mixer for your construction project according to the practical condition.

PLD concrete batching machine. Look at these specifications below.

It is a kind of equipment to store and weigh the aggregates. It can distribute aggregates of sand, pebble and stone automatically according to the designated proportion.

Feeding system: it consists of storage hopper and feeding device, the main function of it is to store the materials and feed materials to the weighing hopper under the control of control system.

Rmc plant silo. There are specifications about it below.

In general, it is cylinder support structure, the whole silo is supported by four circular tube legs, and all the silo is steel structure form. There are two kinds of cement silo, one is bolted type, another is welded type. They can be used as reserve container for bulk cement in building, urban construction, road, bridge and file and also can be used as batching equipment of bulk cement in the mixing station.

Bolted type cement silo is easier to move, but it needs to be installed when it is in construction site.

Welded type cement silo don’t have to be installed and can be used directly.

the following pictures are these two kinds of cement silos, left one is bolted type, right one is welded type.

It is conducted in PLD concrete batching machine. And there are two ways to weigh the aggregates: separate weighing and accumulative weighing.

Separate weighing: it means under each storage hopper will be a weighing hopper accordingly, all the aggregates weighing is conducted at the same time and using this way is quite effective.

Accumulative weighing：there is only one weighing hopper under the storage hopper, all the aggregates is weighed in turns. This way is pretty slowly but corresponding PLD batcher is much cheaper.

Belt conveyor is to convey aggregate;

Screw conveyor is to convey powder;

In short, send all kinds of aggregates to the PLD batcher and after the weighing process, the proportioned aggregates will be sent to the storage hopper by the belt conveyor temporarily; and then the powder will also be sent to the storage hopper by the screw conveyor; water and additive mixture will be flooded into the mixing console firstly together with the powder and mix them, after a while, discharge the aggregates into it and accomplish the second mix, after the whole mixing process finished, discharge the materials into the concrete mixer truck and send the concrete mixture to the construction site.

3. Low energy consumption and friendly environmental protection. We adopt high manganese alloy, which is beneficial to reduce the residual concrete;

Because there are too numerous rmc plant manufacturers to mention, and new types mixer spring up continuously, only inject new idea and spirit into the machine, will we create a new land in construction machine field. And we will give you the most reasonable price.

We are rmc batch plant manufacturer in China, devoted ourselves to the innovation and reform of the rmc ready mix plants for years. And we are sure of our company and our machines can fully satisfy you. And also we will offer you considerate service.

Don’t hesitate to click on our website and get more information for our rmc plant. We will give you best rmc plant quotation.